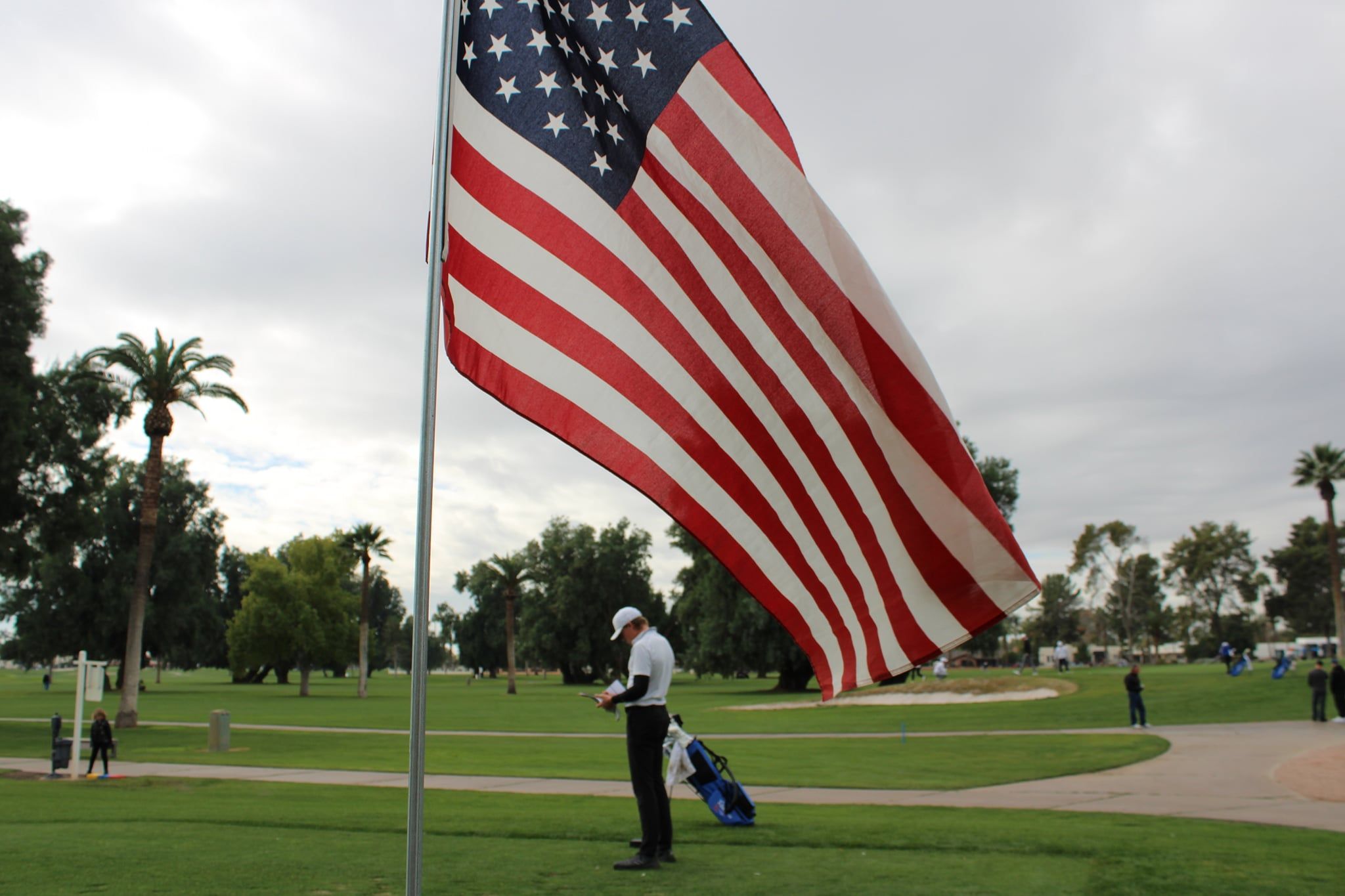 LITCHFIELD PARK, Ariz. – Michigan State senior Valery Plata and Pepperdine sophomore Kaleiya Romero surged to the top of the Women’s Division leaderboard, while Marquette graduate student Hunter Eichhorn made a run of his own to sit atop the Men’s Division after two rounds of the 11th-annual Patriot All-America at The Wigwam Golf Club. The 85-player men’s division is being played on the Gold Course, and the inaugural women’s division, with 41 players, is being contested on the Blue Course. View the entire leaderboard here.

A native of Floridablanca, Colombia, and former Big Ten Player of the Year, Plata chipped in from off the green on 18 to finish her round at -5 (65), tying Romero for the Women’s Division lead. An all-WCC First Team selection, Romero had more ups than downs in her second round, countering three bogeys with five birdies and an eagle for her second straight -4 (66).

“Everything’s been pretty good except for my tee shots, so I’m hoping to fix that and go low tomorrow,” said Romero.

“I’ve been hitting it pretty well off the tee, and I’ve been making some pretty good approach shots and putts I guess that’s what it takes to do well out here,” said Plata.

Eichhorn had a bogey-free round with seven birdies to match the Patriot All-America low-round record of -7 (63). The Carney, Mich., native birdied the last two holes to take the 36-hole lead into the final round.

“I got off to a little bit of a slow start, but I kind of got the putter hot and started to hit some good shots, and it all came together,” said Eichhorn. “[Tomorrow] I need to go out, have fun, be aggressive when I can, try to make some birdies and try to avoid making any mistakes.”

Texas sophomore Ashley Park set a new Patriot All-America Women’s Division low-round with a -7 (63) on the Wigwam Golf Club Blue Course, at one point birdieing seven straight holes. Park tallied eight birdies on the round against one bogey to account for her record-setting score, and sits T-11 at -3 overall.

“Honestly, I had had four birdies in a row and I didn’t even know my score,” said Park of her historic round. “After the three after that I was just thinking keep it simple and play golf. It’s my best score yet, so it’s really nice.”

Notre Dame junior Palmer Jackson and Arizona State fifth-year senior Mason Anderson are tied for second at -9 overall going into Friday’s final round. Connor Howe and first-round leader Chase Sienkiewciz are tied for fourth, one shot back at -8.

“I’m hitting the ball better than I ever have,” said Anderson, who has yet to make a bogey at this year’s Patriot All-America. “I’m hitting a lot of fairways, hitting a lot of greens, and not really putting myself in positions for bogeys at all. It’s usually just a two-putt par or maybe I make one and it’s a birdie, so my ball striking has been really nice.”

Ivy Shepherd of Clemson and Natasha Andrea Oon of San Jose State sit tied for third at -6 overall, and Mychael O’Berry of Auburn rounds out the top five at -5 heading into tomorrow’s final round.

The Patriot All-America honors fallen or severely wounded soldiers in partnership with the Folds of Honor Foundation. The golfers receive a golf bag donated by PING Corporation at the event’s opening ceremony emblazoned with the name and branch of service of a fallen or injured military member whom they shall represent. Participants also receive a card with the soldier’s story so they can be familiar with that soldier. The theme of the tournament has stuck a chord with many of its players.

“Being able to represent someone who served our country means a lot to me,” said Park. “My father is a huge supporter of the Patriot and Folds of Honor. Unfortunately he couldn’t come to this event even though he was really looking forward to it. I just wanted to make him proud and make him happy to see me out here representing one of our heroes.”

Final Round play from the Wigwam Golf Course is scheduled for 9:00 am on Friday, December 31. For more information including live stream links, live scoring and player pairings, visit patriotallamerica.com.