On September 14, 2008, 12-year-old Korengel was playing golf with three friends in Cincinnati, Ohio. While standing over his putt on the eighth hole, a microburst caused by effects from Hurricane Ike ripped a limb off a neighboring oak tree, crushing his skull and leaving Korengel clinging to life. A fellow golfer who was a doctor saw the incident and rushed to Korengel’s side. She removed his tongue from his airway and stayed with him until additional medical assistance arrived.

Due to the storm conditions, the 911 system was not properly functioning and it took 45 minutes for an ambulance to arrive. Helicopter medivac was unavailable due to the high wind conditions.

Korengel arrived at the hospital in a coma. When the pediatric neurosurgeon reviewed Korengel’s CT scan he saw that his entire right skull was shattered and his brain was compressed, bleeding and swollen. The surgeon told Korengel’s parents to give their son a kiss before surgery, as it might be their last.

Korengel survived the surgery but was left in coma with little hope for a meaningful recovery. After eleven days of little to no brain activity, Korengel opened his eyes. Weeks later, Korengel fully awoke and realized that the left side of his body was paralyzed. He was told he might never walk again.

Years of rehabilitation followed. He had to relearn almost every function. Hours were spent in physical, occupational, speech and recreational therapy. He endured five brain surgeries during that first year – including a shunt and replacing the right side of his skull, as well as he fought off a few serious infections.

Suffering from left side hemiplegia, Korengel is paralyzed on the left side of his body with little to no sensation. Prior to the injury he was left-handed. He has developed epilepsy as a result of his injury but is seizure free with the assistance of medication. Korengel is technically blind suffering from a left side field cut, meaning he only sees center-to-right in both eyes. Additionally, he has constant double vision.

Golf, and the opportunity to return to the game he loved, was one of Korengel’s main motivating factors in recovery. When told he could not use his left shoulder for golf, Korengel taught himself to swing one-handed. He swings the club as if left-handed but with his right hand. He needs a cart to move around the golf course and due to his blindness needs a coach to spot his ball for him. Korengel also lacks depth perception and needs assistance with lies on the golf course, whether the ball is above or below his feet and reading greens. He struggles with balance due to the lack of feeling on his left side. The right side of his body completely compensating for his left leaves him physically and mentally fatigued.

Korengel attended summer school to complete the seventh grade and attended eighth grade on an abbreviated course load. He returned to full-time to school as freshmen in 2010. Korengel finished high school and was accepted to attend Mount St. Joseph University. After his acceptance to Mount St. Joseph, he approached golf coach Joe Sparhawk about an opportunity to be involved with the golf team. After the conversation Korengel was offered a roster spot on the team.

Doctors recommended taking classes part-time and commuting from home. Korengel lives in the dorms, without assistance, carries a full class load and earned a 4.0 GPA while competing on the golf team. He was selected by his teammates to represent them on the Student Athletic Advisory Committee.

A communication and new media studies major, Korengel believes he suffered his traumatic brain injury for a reason. He wants to become a motivational speaker, help others deal with difficult situations in their lives and serve as an example of determination in the face of adversity.

“It’s really an honor to receive the David Tom’s Award,” said Korengel. “When I was first nominated I wasn’t sure if I deserved to be mentioned in the same conversation as the past recipients. When I got the call saying I won the award, I was shocked! I feel so blessed to be playing golf at all, so it is amazing to be honored for all of my hard work.” 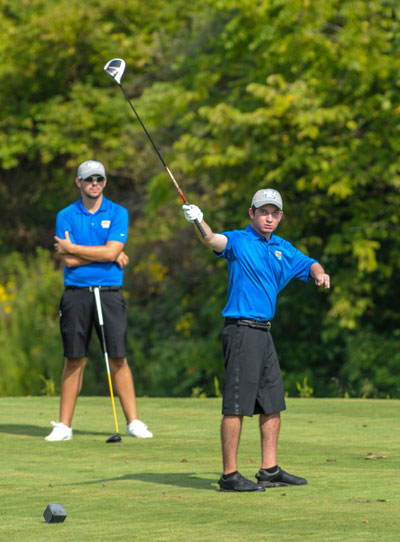