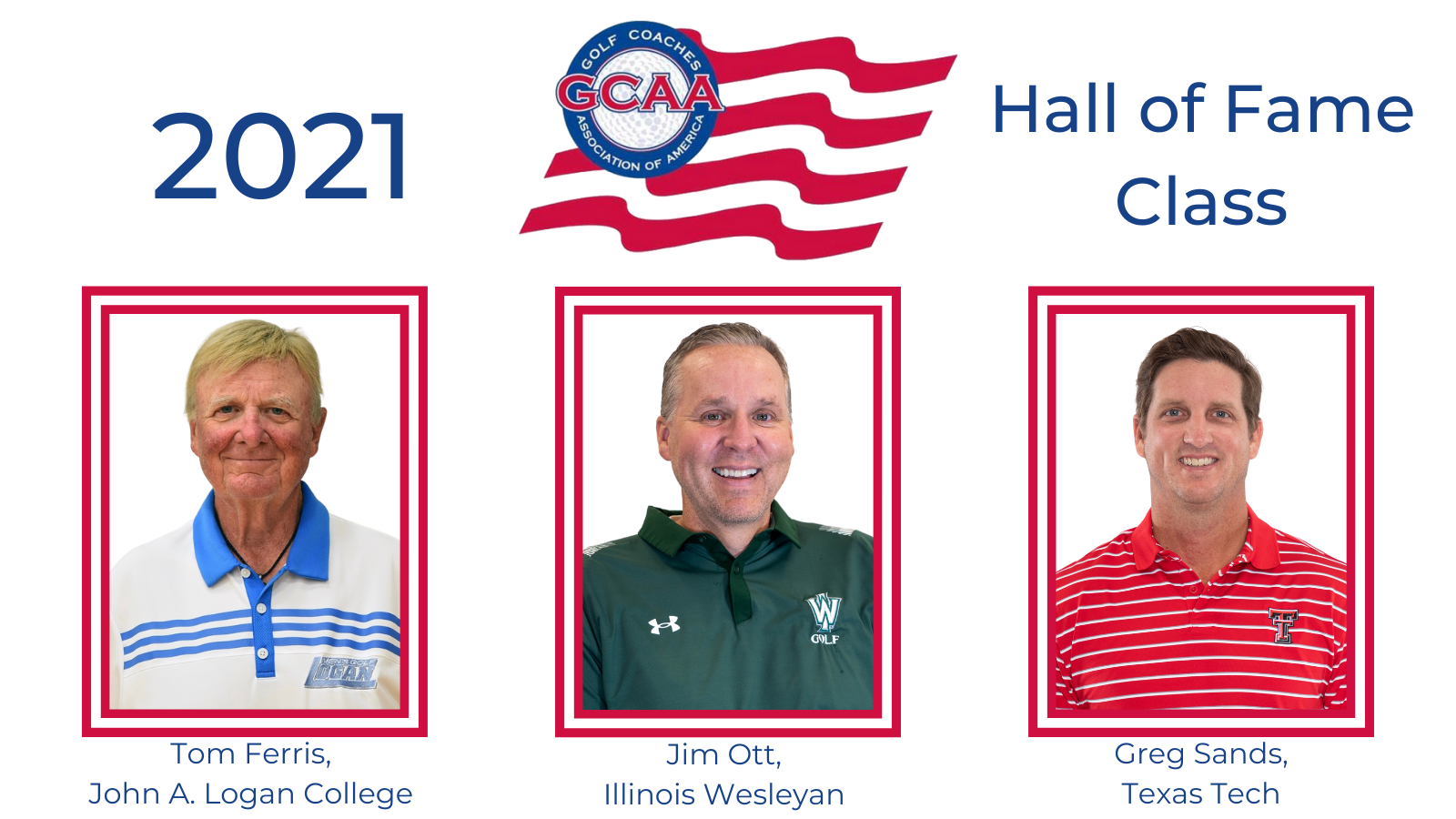 NORMAN, Okla. — The GCAA is pleased to announce its 2021 Hall of Fame class, which consists of Tom Ferris, Jim Ott and Greg Sands. The trio will be officially inducted at the GCAA Hall of Fame Reception and Awards Dinner on Monday, December 6 in Las Vegas.

Ferris is in his 23rd year as the men’s head coach at John A. Logan College, where he has led the Vols to two team (2009 and 2011) and two individual (Marcelo Rozo in 2010 and Filip Timmerman in 2011) NJCAA Division I National Championships. His personal accolades include being named the Region 24 Coach of the Year 12 times. Ferris previously was at the helm of the Vols’ women’s golf program when it was created in 1998, leading JALC to the Region 24 Tournament title in 1998 and NJCAA Division I Nationals in both 1998 and 1999.

Ott is in his 22nd season as Illinois Wesleyan’s head coach, where he has led the Titans to unimaginable success. Included in that success is winning back-to-back NCAA Division III National Championships (2019 and 2021), 17 of the last 20 College Conference of Illinois and Wisconsin championships, making appearances in 14 straight NCAA Division III tournaments, and fielding numerous IWU alumni into professional tournaments. Individual accolades for Ott include three-straight Dave Williams National Coach of the Year awards (2019-21), eight CCIW Coach of the Year awards, and coaching 33 PING Golf All-Americans and 18 Cleveland Golf All-American Scholars. His Illinois Wesleyan teams have earned seven-straight GCAA All-Academic Team honors as well. Ott has served on the NCAA Men's Golf Committee since 2018, including as chair in 2020-21, and holds posts on the Golf Coaches Association of America All-Region group and the Jack Nicklaus Player of the Year committee. He is also the Chair of the Central Region Golf Committee and served on the Central Region Men's Golf Advisory Committee from 2014-17.

Sands is the immediate-past GCAA President and is in his 21st season as the head coach at Texas Tech, where he has established the Red Raiders as a perennial contender on the national stage. Most recently, Texas Tech made their 10th trip to the NCAA Championships under Sands after winning the 2021 NCAA Albuquerque Regional Championship. With Sands at the helm, the Red Raiders have accomplished many firsts, including the program’s first PING First-Team All-American, setting school scoring records, and earning two of the top-three highest NCAA Championship finishes in program history. Sands also served as the head coach for the United States at the 2021 Arnold Palmer Cup.