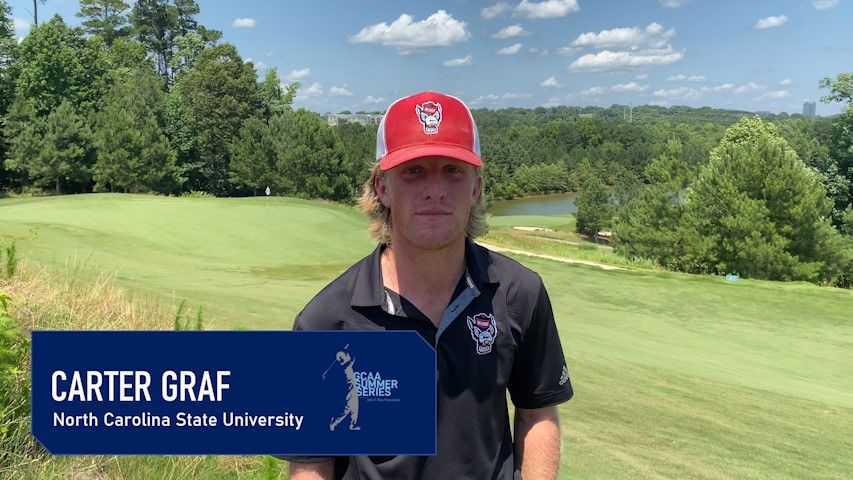 The first round of the GCAA Summer Series at Lonnie Poole Golf Club at North Carolina State University has concluded with NC State’s very own Carter Graf atop the leaderboard with a round of five under 66 and a three-shot lead.

Graf started hot with birdies on hole Nos. 1, 4 and 7 to quickly boost himself to three under until a four putt on the par-3 eighth resulted in a harsh double bogey.

“It kind of rattled me a little bit,” Graf commented after his round, “but I just tried to stay patient, and [I] kind of waited for it to happen. I swung it well all day, and then, last four holes, I felt like it just kind of opened.

It did open. Graf finished with four straight birdies to vault himself into a commanding lead. Graf will tee of tomorrow morning at 7:30 am EST on hole one.

The Wolfpack sophomore would not be the only one to have a successful round in red figures. Virginia Tech’s Drew Brockwell turned in a solid two under 69 to put himself in solo second. Brockwell thrived on both par-3s and par-5s. He leads the field in par-3 scoring and was able to hit the par-5 11th in two with a 295 yard 3-wood.

“It was playing down wind . . . I just decided to hit 3-wood as hard as I could cause I knew I had the distance to carry the front lip,” Brockwell explained post-round.

He would two-putt for an easy birdie to go four under, before the sixteenth dropped him back two shots.

Three other players carded rounds under par and are tied for third. Georgia Tech’s Bartley Forrester, Western Kentucky’s Connery Meyer, and Stanford’s Daulet Tuleubayev, who combined for a staggering forty-one pars, and were a combined three-under are among those vying for the lead heading into Tuesday's round.

Play begins at 7:30 am local time with split tee action.